Melburnians have a complicated history with apartments. A sort of on-again, off-again affair that’s never quite managed to hit its straps.

It’s a dynamic that is now more strained than ever, owing to COVID and the hangovers from our investor-grade apartment legacy, and yet with housing becoming increasingly unaffordable, apartments are now something many of us simply cannot live without. Thankfully there are some innovators – developers who are doing things differently and charting a new path for apartment living with community-centered, sustainable models of housing. We caught up with urban designer, design advocate, and friend of NTS, Andy Fergus, to explore, and we found plenty of reasons to be optimistic.

NTS: Firstly, who are you and what do you do?

Andy: I’m Andy Fergus. I’m a bit of a hybrid urbanist. I have a background from across planning, urban design and architecture and work as a bit of a translator between these disciplines. So I’m equally as interested in the city as I am in the detail of a front door and a lot of my work operates between those two scales. So anything from design policy, apartment regulations at a government level through to working on innovative housing proposals and prototypes.

NTS: Building great apartments and apartment living in general hasn’t been Melbourne’s strong suit. Why is that?

Firstly, I would agree with you. There were a lot of apartments built between 2004 and 2017 where basic standards of light, ventilation – very basic elements of livability – were not being achieved because of, essentially, a lack of regulated minimum standards. But also an investor dominated market rather than one where owner-occupiers played a significant part. And I’d say quite an immature market, so things would sell based on having a certain square metre rate in the right suburb with some flashy finishes that might have capital growth over time. They weren’t motivated by quality, durability, outlook, amenity – all of these sorts of things that are essential to an intending resident.

We can look at the specific things wrong with the materials and the quality and the finishes and the light and the amenity and the spaces or we can look at why. And the reason why is because many architects, many developers and designers in this city were building from a position of targeting investor sales. So we were geared towards delivering a very particular sort of apartment. Young architects with no housing experience were indoctrinated  into a ‘rack and stack’ mentality, to make apartments as small and efficient as possible. Many would never have lived in an apartment or designed apartments and learned from the experience of them as homes. So I think we got into some bad habits from designing for that market, which couldn’t contrast more with the kind of love and personality that you see in Never Too Small with people making their own homes as the complete opposite end of the spectrum.

Andy: There’s kind of an inevitability to apartment living [in Melbourne] now – it’s not so much of a choice. I think that’s really interesting because of a range of economic and cultural factors that have seen living in apartments  transform from being an inadvertent condition to an intentional, if not desirable one. And that’s where we see the shift in market maturation – people demanding more, more media interest in apartments, more design industry focus on apartment living and increased competition between developers who are forced to innovate to achieve commercial success. All of them are responding to people who are no longer seeing apartments as a temporary necessity but as an inevitable way of living within a more urban context.

In 2014-2016 there was a lot of focus around apartment standards and quality and we saw community backlash which was a fantastic impetus for change. People started to understand what bad development was like as we all saw poor quality projects in our neighbourhoods and visited friends in their unlivable homes or heard the stories of endless defects. But there were enough people who wanted to live in apartments that they were demanding more. So a range of alternative housing development models have come in to fill a gap for people who have either lived in apartments before, liked the idea of collective living, had lived overseas and moved back to Melbourne and wanted that quality of life still, and these early adopters who were interested in values aligned apartment development. The demographics were quite interesting too because it wasn’t just millennials looking for a first home, it was also single older women or empty nesters who wanted to downsize, be able to lock up their apartment for part of the year and travel but also really loved being part of a community and also safety was really important to them and they liked to contribute to their neighbourhood.

NTS: Nightingale, Assemble and Hip V. Hype in particular have been on our radar for some time (details on where they’ve featured on NTS below!). We’re excited by their focus on sustainability, community and longevity in their design. For those new to these developers and their models, can you provide a bit of an overview of  what they’re doing?

Andy: Everytime someone asks me this question I feel like a new model has popped up. Melbourne really has been the epicentre for this explosion in creative approaches to housing development in the past decade. We documented this through Home Made in Melbourne Design Week, as a way to generate public discussion. To look at each individual model is really interesting because some people might say they’re in competition with one another but I actually think they’re providing for very different communities and as they’ve matured and housing has become even more unaffordable they’ve each looked to different tactics of how to address that.

Nightingale comes from a platform of high sustainability ambitions and architect-led development. However as Nightingale’s prices are pushed up by being in Brunswick [a suburb in Melbourne’s inner north] where land is not as cheap as it was in 2014, [they’re] looking at tactics of how they incorporate affordable housing into their developments. This can include very small studio apartments called ‘Teil Houses’, which are cross subsidised within the development by larger three-bedroom apartments, to create small autonomous living spaces for students or hospitality workers. They are also partnering with community housing providers to purchase some of the units for social and affordable housing.

Assemble has quite a different focus, with two models capturing both aspiring apartment owners as well as longer term stable affordable rental housing. Assemble is focusing really hard on the specifics of the in-need demographic groups and starts looking at: what are key workers earning? What can they spend on rent? What are the things that can be made easier for them and how can we design a pathway to homeownership [for] people who might have been able to afford a home themselves 10 years ago but they no longer can. So, it’s trying to create a system where people can rent first and move into an apartment over time while they save for a deposit.

The thing that’s also really fascinating about this model is it’s also a reaction to the purchaser fear of defects and so a lot of people see that try-before-you-buy as a really interesting way to know that the quality, and of course the community atmosphere is truly going to be what it’s purported to be.

Hip V. Hype is interesting by comparison. They build smaller scale projects where they try and push everything. They’re focus is less on affordability than piloting sustainability initiatives from thermal performance to energy systems and construction methods. Unlike other development companies Hip V. Hype is both a consultancy and a developer. So they’ve got their Better Building and Better Cities Team writing progressive policy all across the state to increase the standards everywhere. So when they build their own developments of course they want to trial innovation, and then scale this through the broader market both through demonstration and through the reach of policy. It’s about small scale prototypes that are incredibly ambitious on sustainability with the view that by achieving that innovation and normalising it for the industry they’ll increase the ability for other people to uptake it.

Each of these models brings a strong focus on legacy and long term reputation which is important. They’re responding to increasing maturity of the market and sophistication of demands around sustainability and apartment design in a really authentic legacy oriented way. With the innovative housing models their promise of quality has to match the reality because if they don’t deliver on it, then it’s their risk as a model and if they want to continue building buildings and growing their success and impact on the city then they need to really deliver the quality.

NTS: Speaking of success and legacies, what does that look like in an apartment from your perspective ? What does your dream home look like?

Andy: For me (and my partner, Kath), it would be a dream building rather than an apartment. We want to develop our own project with more flexible, adaptable apartment layouts, that allow for change over the life of the building, for a range of demographic needs. Really it’s about learning from our favourite aspects of 60s apartments.  We are also really driven by providing space for things other than housing that contribute to the city, so we would love to do something like a compact 12-15 apartment building over 5 or 6 levels , but the ground floor might be a super flexible space that can be used for comedy festival events or a piano recital or leased out for a residency to a young artist. I love this Dutch concept that housing is a great source of investment to enable other things, in this case cultural space, which is really suffering in Melbourne. So rather than thinking ‘we want a great home, for us it’s about ‘what can our housing do for our city’? It’s really stuck with me as an idea, that my investment in my own home can bring an opportunity for things that are more important than me in my city. That would be my dream.

Andy Fergus wears many hats including that as an Advocacy Lead for Urban Design Forum Australia and is also Head of Urban Design at Assemble.

Apartments from Nightingale 1 and Nightingale 2 have been featured on NTS along with an apartment from Assemble’s Roseneath St project. One of Hip V Hype’s prototype projects, The Davison Collaborative can be seen in Episode 3 of our limited series Small Footprint. 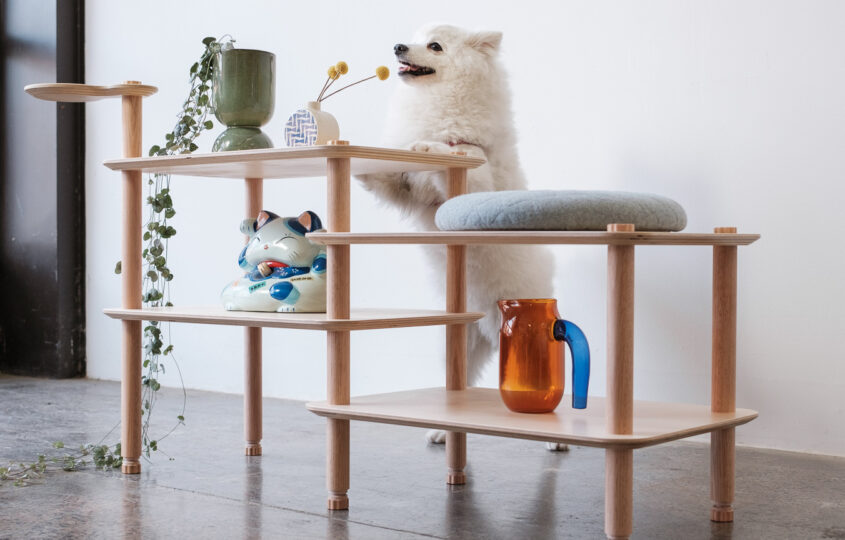 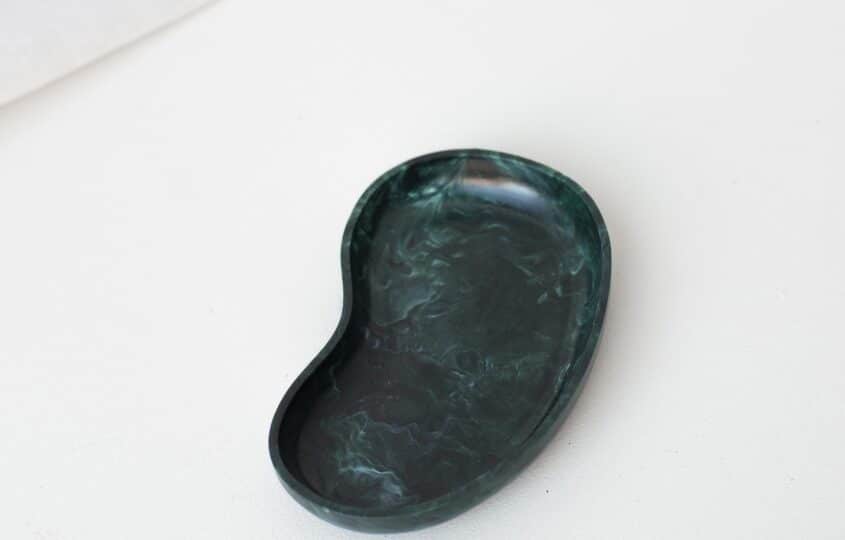 What is durable, malleable, and comes in every conceivable colour, pattern, and texture? Norwegian beach plastic, that’s what.… 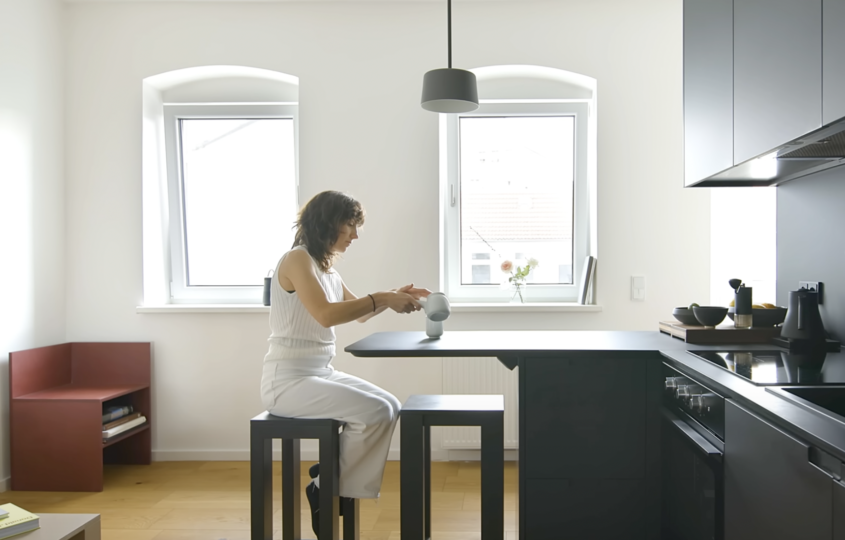 From Spain to Berlin

An interview with the accomplished Architect Paola Bagna. Designer of the first German home featured on Never Too…